Turmeric is a root spice, similar to ginger, which has been used in a variety of different traditional medical practices. This has been involved with a variety of culinary cultures from south Asia, primarily in curries, but it is also able to be eaten by itself. Curcumin is one of the active ingredients in Turmeric and gives it the yellow-orange color. These two foodstuffs have traditionally been treated as medicinal, involved with inflammatory conditions, digestive problems and more severe conditions such as cancer or infectious diseases.

Turmeric, eaten by itself, has 350 calories per 100g of which the majority are carbohydrates (65%), a small amount of fat (10%) and 8% protein. Eating this spice by itself is not necessarily advised – mostly because it would be an overpowering taste – but this is the fastest way to gain the benefits of Turmeric and its Curcumin content. As a spice, however, it can be added to a variety of foods, such as turmeric rice, milk or herbal teas. Whatever form you choose to take it in, this article will outline the 13 best health benefits associated with these foods/compounds.

Potassium is important for regulation of the metabolism; working with sodium, it regulates the body’s retention of water. Potassium is also essential for bone health [1]. Per 100g, Turmeric has one of the highest Potassium content of any foodstuff, at 2080mg. This is over 50% of the daily recommended dose for Potassium, making it a great way to keep your bones and metabolism healthy.

Another nutrient that Turmeric contains in abundance is dietary fiber: at 22.7g per 100g of food, Turmeric has a huge quantity of soluble and insoluble fiber. Fiber has a variety of health benefits: blood sugar regulation, digestive health and metabolic regulation [2]. 100g of Turmeric, whilst it may be difficult to ingest by itself, is around 40% of the dietary fiber an average adult needs, meaning that it can have profound effects on health if consumed in large enough quantities.

When eaten by itself, 100g of Turmeric also contains almost 150% of the necessary daily B6 that an adult will need. This vitamin is associated with reduced chances of developing Anaemia, epileptic seizure, metabolic disorders and plays an important role in the proper construction of amino acids (and thus proteins), carbohydrates and lipids in the body [3].

Iron is an essential mineral that many individuals are deficient in: Iron is associated with proper health of the blood and energy transfer [4]. Severe deficiency in iron can lead to anaemia, a condition with a diverse array of negative health effects – proper iron intake is especially important for women before menopause or those who are vegetarian/vegan. Turmeric presents a great option for plant-based iron intake and is easily incorporated into foods such as Dahls, making it one of our favourite options for those who are committed to a meat-free diet. We can achieve 100% of the RDA for iron with only 20g of curcumin, making it an easy and effective source.

Similar to Iron, manganese is an essential mineral that is tied to proper blood health: failure to consume enough through dietary means can result in exaggeration of Anaemia or premenstrual syndrome. One of the most important functions of Manganese, however, is the maintenance of proper mineral density in bones – the lack of which will result in Osteroporosis: a weakening of the bones, often associated with frailty and fractures during advanced aging [5]. 30g of curcumin will contain 100% of your RDA for Manganese.

Zinc is the final major health benefit of Turmeric and it is one of the most misunderstood and under-rated mineral for human growth, development and performance. Zinc is intimately linked to the body’s maturation process and development [6]. Zinc deficiency has been linked to a variety of muscular, exercise and reproductive symptoms that can be at-least-partially treated through the increased dietary intake of zinc. Turmeric is rich in Zinc, with 100g providing 40% of the RDA – whilst we would not recommend regularly eating 100g of Turmeric by itself (due to the negative effects that high levels of iron can have in the body), consistent supplementation of healthy quantities can make proper zinc intake far easier. 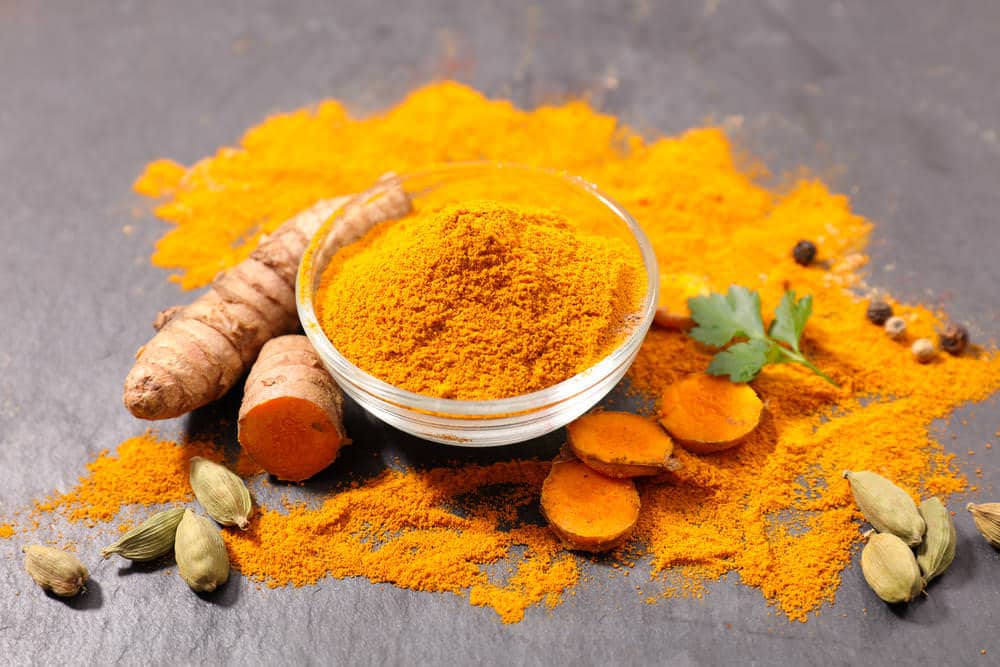 Curcumin, as a polyphenol, has profound anti-inflammatory effects. This has been linked to reduced pain in cases such as arthritis or similar conditions, where excessive inflammation in joints causes serious issues. Anti-inflammatory processes are incredibly important for the body regulating itself and reducing long-term harm [7].

Initial reports suggest that Curcumin reduces the risks of cancer among large populations. Whilst the science is still sketchy on the subject, and further investigation will make these effects clearer, the mixture of anti-inflammatory effects and other properties is likely to reduce overall risks from more specific carcinogens and processes [8].

Anti-oxidants are a huge part of maintaining positive health into old age. When we perform exercise, or undergo any other “stress” stimuli, the oxidation of cells occurs and damages cells and tissues – this has also been associated with a variety of health conditions. Curcumin is an effective anti-oxidant and can reduce the chance of these long-term negative health effects [9].

Curcumin can also positively effect brain health and cognitive function as we age. In initial research, there are some suggestions that it can reduce the onset of Alzheimer in individuals of advanced age [10]. In addition to this, proper intake of anti-inflammatory, anti-oxidant and generally “healthy” dietary foods have been linked to the way that Alzheimer’s disease affects humans.

The consumption of Curcumin has also been shown to have some positive effects on the way that the body processes and utilises cholesterol and triglycerides [11]. This has primarily been shown to affect the concentration of lipids and cholesterol in the blood stream, as well as the development of plaque in the arteries. These two effects, especially combined, can have large impact on the risk of coronary health conditions such as heart disease or hypertension.

12: Reducing the risk, and symptoms, of Diabetes

Along with the high fiber content of turmeric, it has been suggested that Curcumin may also affect the way that diabetes occurs. Those demonstrating pre-diabetic signs have been shown to have improved response to Curcumin, with positive changes in the levels of Adiponectin [12]. Adiponectin is involved with the breakdown of glucose and fatty acids in the body, which can change the blood sugar levels in the body and reduce the chances of pre-diabetes developing into Type-2 diabetes.

There is a lot to be said for the combination of anti-inflammatory and anti-oxidative effects; the dietary fiber found in Turmeric and the various effects on blood lipids and adiponectin. These benefits not only reduce the onset/development of type-2 diabetes, but also deal with some of the main symptoms.

One of the traditional uses that Curcumin actually delivers on is the prevention and relief of pain. The compound has strong analgesic affects [13] and, whilst this is only effective at a dose of around 500mg (more than you should eat), low-level supplementation may also have some positive, though massively-decreased, effects on general aches and pains. This has primarily been used for the reduction of soreness and stiffness in individuals with osteoarthritis.